TRANSITIONS
As the mass migration away from Sri Lanka grew, Tamil life spread to many places, including Germany, Norway, Denmark, the UK, Canada, Australia and the USA. This type of experience is often referred to as diaspora. Transition relates to many types of experiences involved in this large-scale migration: immigration, finding work, claiming asylum or refugee status, being away from family and friends and staying connected with events in the country of origin.

Being ‘in transit’ may refer to feeling constantly out of place or finding the support of community in London. It also refers to the customs, traditions and beliefs transferred to the new residence and from generation to generation. Finally, it refers to the many different experiences of later generations growing up outside of Sri Lanka. In this section, our speakers talk about this experience of transition in London. 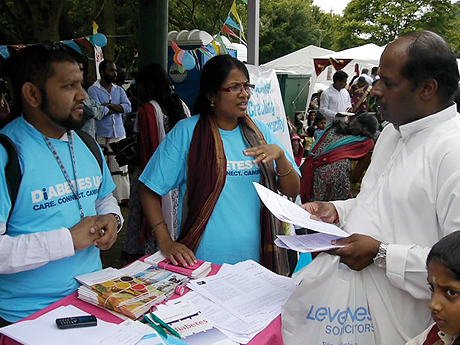 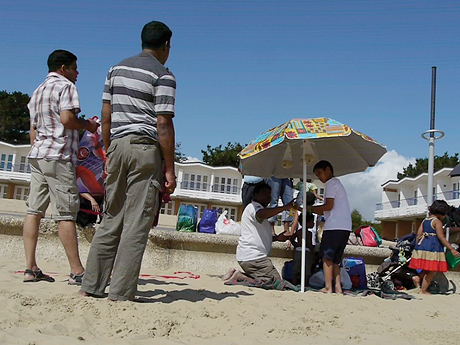 ‘…We met at one of my cousin’s house in Wimbledon. Then my husband’s
family, my husband’s sister and brother came, and my brother and my cousins.
Then first my brother met my husband, then he was happy, he said, ‘He’s good
– you can go ahead.’ My parents, you know, we have got system, we need to
see the horoscope and if the horoscope tells you and then we can marry –
and same religion, same caste and everything, same…I was very happy and I
didn’t expect that quick, you know. I came here only January and all of a sudden
they arrange and everything and it’s nice. All my training students, all African,
all the community people, all came to my wedding in Wimbledon Temple…’

‘…Initially we had this plan to go back, both of us. And we didn’t even want to
–many people who came with us, they bought their houses and this and that.
We decided not to buy anything. We still had that idea of not having any
possessions.So we just rented out flats and moving here and there. I think we
would havemoved about ten houses between 1986 to 1994. Then obviously
when you areliving together, you will have children. I don’t know, even now
I am not fully settledas such. But I can say that now I’m, to be honest, now I am
in quite a reasonable life, lifestyle and everything is OK, fine…Yeah, you have
this, it’s not about our life and our pleasure, it’s a broader outlook you have.
So you always think about your own failures. What you wanted to achieve is
not like running a marathon and becoming first or whatever [laughs]. You know
you think about it in a different way. So it’s always lacking, whether we failed
to do certain things, what is our mistakes. It’s always unconsciously…’

‘…Now in the UK, I work as a specialist health visitor with mostly marginalised
communities who are refugees, asylum seekers, and I work in Hayes, where
there is a large Tamil Sri Lankan refugee population, and I speak Tamil, so I
work very closely with them, with all of them. But because I speak the language,
maybe more Tamils come to me, and I have listened to the stories, and I’ve cried
with some of them, and I know they are suffering here too. Not because now
they are fearful of the Sinhalese but their own issues, their own stuff is coming
out, depression, anger, domestic violence, a sense of not belonging, you know,
being in a place, but wanting to be in a place which is not there anymore.’

‘I have been here for ten years. My weakness is I am spending all the time with
BBC and my family. I don’t have any social life here because I lost everything
because as you said, as a man repatriated, displaced from one place to another,
I am always thinking about my family and my job here and always thinking
about the studies of my children and other things, nothing else. I don’t have any
social life here. That is my very big weakness.’

‘We were involved in a project where we were trying to bring back into school
the children who had dropped out. Because they are poor, the families don’t let
them go to school. So when they are not allowed to go to school they are on
the streets. So we had to mobilise them in the guise of cricket matches, football
matches and get the parents to come…Our role, what I always say is, our role is
constantly to create space for the ordinary person. That’s our role, nothing else.
We took up an initiative on repealing the emergency regulation. The reason is
because the emergency regulation, PTA [Prevention of Terrorism Act], curtails
the ordinary person’s space. For that if we can campaign, lobby, get the
international community to put pressure on the Government of Sri Lanka to
look at it differently and change, then the ordinary person will have space
to talk openly for his or her interests or develop or do whatever they want.
It is the same with development.’

‘Obviously when I was five I didn’t exactly ask my parents to go to Tamil school.
I was sort of forced into going. But it was really fun. It wasn’t necessarily like
in school atmosphere; it was very lighthearted and our teachers were very nice.
And it was class just like in school, it was a class of, like, twenty-five people,
students, and I remember it being interesting because I had my family around me
– my cousin was in my class as well. When I was five, I started learning Tamil as
well as vocal and classical dancing – vocal as in singing…’

‘I wanted to do music, I really did and I was very good. I could’ve done music but I didn’t. I decided it wasn’t a career for me, not because of ability but more the opportunities available, kind of the fact that it’s very hard to make a name for yourself and I would only be interested in performing and you have to be both very good but also have lots of contacts – and like a dream, the dream I seriously considered was becoming a musician. And that’s not a very Asian dream, like I’m very aware and I was very aware when I was growing up that, like, I would take part regularly in music competitions and obviously be the only Sri Lankan Tamil there for every concert I took part in. So you’d see the concert list and really that was one of the things that really kind of, although at that time I still wasn’t really seeing myself as Tamil, I was just let’s say fully aware that there would never be anyone else that wasn’t white there. So that was quite interesting.’

‘So for many years all of us, all three of us, started to engage differently with our
identities, which only came into question after being out of the Jehovah’s Witness
doctrine which really dominated most of our lives. And all of us took different
approaches upon how we tried to understand ourselves and our environment
and surroundings. One of my brothers became a philosopher and he detached
himself from all these notions and these subjective kind of ideas and notions,
whereas the other one started to engage much more in Hinduism and started to
trace much more belonging in this identity of being a Hindu and being a South
Asian and being from that particular subcontinent. And I found myself in my own
identity much more in these kind of Tamil politics and the identity and the
history… I mean like we had our own sheltered world where we kind of
disconnected ourselves from our peers and from our environment, which started
off with Japanese kind of comics, right. So that was in 1997, I was 12, right.
So we started to live in a way, like in this parallel kind of world that gave us
some safety and sanctuary that we never found within this real world that we
lived in. And I think we spent a lot of years in that kind of world and we had this
parallel world for a very long time. It altered. It became black music culture.
It became even different forms where we tried to identify ourselves with and
where we tried to find commonalities within it, right.’

More from my site