LAYERS OF BELONGING
Reflecting on relationships in Sri Lanka between people of different regional, economic, ethnic or linguistic backgrounds, many recall a rich diversity of interactions. While many grew up in largely Tamil-speaking areas of the Jaffna Peninsula or Batticaloa, the demands of work or education brought many to Upcountry tea plantation areas, Kandy or Colombo. As people grew up and changed, so did the political and social landscape. Discrimination and exclusion
in work, education or language became a reality for some.

At the same time, many of our speakers report little separation and more fluid relationships between peoples of Muslim, Sinhalese or Tamil descent. There were, however, large variations in the experiences of place and identity among people living in Jaffna, Batticaloa, Upcountry, Colombo, or elsewhere, between people of Hindu, Buddhist, Christian or other faiths, in addition to gender, age, wealth and caste distinctions. 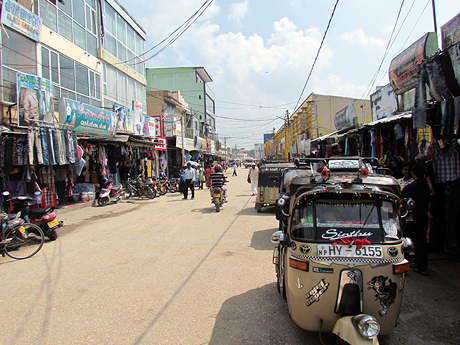 ‘We all played together fine. The only difference was we knew we belonged to
different ethnicity or linguistic groups, but otherwise we were children all playing
together. With the Burghers obviously you spoke English, but, you know, there
were children who spoke Sinhalese…and Farsi…you know those traders, those
rich traders, Kundanmals and Nagindas? They were there in Kirulapana…
so English and Sinhalese. There were Tamils, some Tamils. Can’t remember.
We got on well. The language wasn’t in the picture at all. We just got on well.
We had fun; we were children, climbing trees. No, language was not an issue.
Even when the riots had happened, there was no issue afterwards with the
children. When we were playing it never came into the picture.’

‘There was no distinction, no one said, ‘You’re Tamil’, ‘you’re Sinhalese’ – that
never happened, so much so that by the time I moved out of college still there
was no strong distinction…I was always in love with the Sinhalese; they were
my friends [laughs]. My best friend was Sinhalese and even now, when I am in
the company of Sinhalese, just to make them comfortable, I will speak to them
in – you know, because I am familiar with the Sinhalese idioms – I break into
Sinhalese, deliberately.’

‘My father was Tamil. You only saw Muslims when you went to Jaffna Town.
At that time in 1947 and 1957, you would only find our people in Vadamarachchi.
Merely in Jaffna Town would you encounter Muslims. Back then it used to be
such a curiosity. Here, in London now, we see all kinds of people.’

‘And my appa…he was telling me about the kind of positive relationships they
used to have prior to the ethnic cleansing in the 1990s and how even when
my grandmother died in the 2000s the majority of people who actually came to
her funeral were Tamil Muslims instead of Tamil Hindus. So he keeps on telling
us of his memories of how society used to be and how the interactions between
people were, which is completely altered throughout the war…’

‘They [parents] had been trying to arrange marriages for me and I turned them
all down and then this came along. I said, ‘I’ll never have an arranged marriage
in my life’ and I fell in love…And her parents didn’t like it and my parents didn’t
know about it till a week or two before…Her parents didn’t want a ‘Demala’
[derogatory term for Tamil] to marry their daughter and my parents didn’t want,
mostly I think they didn’t want a Catholic, rather than Sinhalese. My father’s
argument was not as racist as theirs. His was much more in the religious vein.
The only thing about the race part was that he said, ‘Mixed marriages are not
going to be accepted in this country and you are going to have a hard time and
the children will be half-caste children. Half-caste children won’t have a future
in this country. You are getting yourself into a lot of trouble.’’

‘I do remember grandma having different plates and cups for different caste
people like, you know. And they would sit outside. They were not allowed to
come inside. Some people were allowed to come into the living room or that
entrance [points to the doorway on the right] but some people they were not
allowed to come inside, they had to stand outside…At that time I don’t think I
understood much of it. I didn’t question much. I don’t think I questioned much
at all. But I think I made friends with all of them – like my friends at school,
they were all from lower castes and things like that. And I do remember my
grandma was yelling at me that I was bringing friends home and they were all
from lower castes. And then I also [would] go and visit them. And I think in the
beginning, she didn’t like it. But eventually I think mum said, ‘Oh, let her go,
that’s OK.’ And then that was OK eventually.’

‘In Sri Lanka, each and every area, the people have different, different laws.
Even Portuguese and British time, they followed the laws. Mukkuvar is a caste,
the dominant caste in Batticaloa…Jaffna was dominated by Vellalar caste…
I belong to Vellalar but we are not majority in Batticaloa, we are few. And that
is the first thing. Marriage customs, also there are some differences. And their
[Jaffna] intention is always into studies and other things. They [Batticaloa] do
the cultivation and other things…And the Jaffna people say they [Batticaloa]
are low caste and they [Batticaloa] say they [Jaffna] are low caste [laughs]. But
nowadays everybody has started to marry and other things, but anyhow there
are differences still. Still there are differences.’

More from my site